I was thrilled to have been given the opportunity to attend the five-day EU-NATO Seminar in Luxembourg City and Brussels this February. One of my most rewarding experiences as a Fulbrighter in Paris has been connecting with and learning from other grantees, and the Seminar provided a rich opportunity to meet grantees from all over the EU in diverse fields and in different phases of their academic careers.

Upon arriving in Luxembourg, we set off for a guided tour of the small but elegant capital city. The shocking heights, ramparts, and sheer rock faces were stunning – if not intimidating, thanks to the sparse guardrails that left a lot to the imagination. The Seminar began with opening remarks and a reception at the US Embassy to Luxembourg, where attendees were treated to introductory talks on the EU and Foreign Service careers, followed by conversations with Fulbright alumni. A highlight of the evening was a toast given by one of the first ever Luxembourger Fulbright grantees, who studied in the United States in the early 1950s, and remembered his experience fondly. Not only was his speech touching and entertaining, but it was a wonderful reflection of the intergenerational nature of the Fulbright community.

The next morning of the trip was the event that I had been eagerly anticipating: a visit to the European Court of Justice, which included a trial on unauthorized pyrotechnic use, and talks by the Court’s President Dr. Koen Lenaerts and Judge Dr. Paul Nihoul. Given my research focus on criminal law, I was fascinated to observe the difference between US and EU courtroom proceedings, as well as the central role of live translation among many of the Court’s working languages. Equally intriguing were President Lenaerts’ reflections on exchanges with members of the US Supreme Court, and the challenges associated with arbitration given the broad range of nations that make up the ECJ’s jurisdiction. After lunch at the ECJ, we left for Belgium for the next phase of the Seminar. On the way to Brussels, we stopped for a tour of the Bastogne War Museum, with a stunning hilly landscape and impressive Mardasson Memorial in tribute to American soldiers lost in the Battle of the Bulge, which reminded me very much of Washington DC’s World War II Memorial. 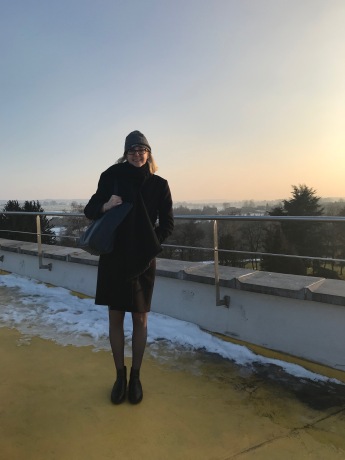 Our arrival to Brussels was marked by a surprise stop at a waffle truck, and we set off the next morning to tour another immensely important institution, the European Commission. Representatives presented on the history of the EU and its sanction and budgetary policies, educational funding and programming through Erasmus, and strategic planning and global modernization. As a proud Erasmus Plus alumna, I enjoyed hearing about all of the amazing partnerships and exchange programs happening worldwide. The day concluded with an address at the US Mission to the EU, where conversations addressed transitioning from academia to policy work and changes to international affairs under the current US administration. Similarly, our final visit to the NATO Headquarters included security briefings that outlined the future of international collaboration. Rather than pessimism about the international sociopolitical climate, all of these presentations focused on capacity for growth and development, and the important role of research and academia in shaping policy.

Of all the impressive speakers who presented throughout the week, our own Fulbright-Schuman scholars were among the most memorable and impactful. Learning about their work in fields ranging from artificial intelligence regulation to breast cancer screening to immigrant integration strategies was fascinating, and their passion for their work was palpable. The Seminar also gave me a chance to connect with fellow grantees conducting independent research (those who are not enrolled in degree-seeking programs). I am one of the only independent researchers in the French Fulbright program, so this was my first opportunity to engage with researchers in the same position.  It was incredibly valuable to discuss challenges and strategies with others who are also executing their projects with limited institutional structure and formal oversight mechanisms. 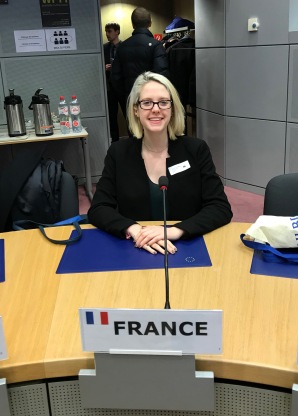 The EU-NATO seminar was undoubtedly one of my best experiences Fulbright experiences thus far, and its diverse multidisciplinary nature brought together professionals from many different fields, leaving me with new ideas on how to conduct my own research, and what I might do next. The in-depth exposure to European institutions strengthened my understanding of international law, and complemented my work on the French criminal justice system. I am grateful to have taken away so much from both presenters and fellow grantees – and, of course, am glad to have new friends based all over Europe!